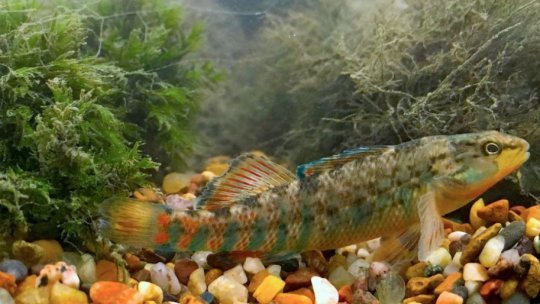 Scientists once thought that female mate choice alone accounted for the eye-catching color patterns seen in some male fish. But for orangethroat darters, male-to-male competition is the real force behind the flash, a new study finds.

The research, reported in the journal Proceedings of the Royal Society B, suggests that separate populations of orangethroat darters are evolving differing color patterns as a result of the males’ ability to distinguish their own from other species.

Darters are small, perch-like fish living in freshwater rivers and creeks in North America, said University of Illinois graduate student Rachel Moran, who led the research with animal biology professor Becky Fuller. The males are showy, with orange and blue-green stripes and patches, but the females are brown and tan.

“The females don’t choose their mates,” Moran said. When fertile, they simply burrow into the gravel and wait for a mate to arrive. “Males of the same species will come up and try to mate with a female and fight off other males,” she said.

Because this aggression is costly and dangerous, the males do best if they compete only with males of their own kind, Fuller said.

“To be successful, they need to distinguish between their own and other darter species,” she said.

In the new study, Moran raised a generation of orangethroat offspring in the lab. She obtained the parents of these lab-raised fish from different populations in the wild. The experiment revealed that the distinctive male color patterns seen in separate populations of orangethroat darters persisted from generation to generation.

“This shows that this is something that is genetically based and that those differences are not due just to the environment,” she said.

She also compared color patterns in populations of orangethroat darters that do and do not share habitat with rainbow darters. Orangethroat populations that never encounter rainbow darters in the wild look very similar to one another, even when they live out their lives in complete isolation from each other, she noticed.

Moran said there is a possible explanation for why the two species have learned to avoid one another: Hybrid offspring have low survival.

“Natural selection has favored fish that are able to distinguish between their own and the other species,” she said.

“As scientists, we often assume that female mate choice is the reason for sexual dimorphism in animal species, where females are very dull and males are flashy,” Moran said. “But here, we’re showing that male competition also plays an important role. We now know that male competition alone can drive divergence in this really flashy signal between species and also within species.” 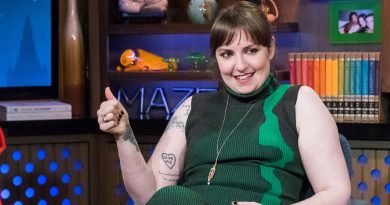 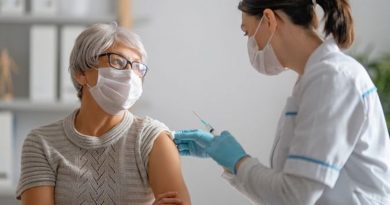 Covid infection rate falls as country edges back to normality