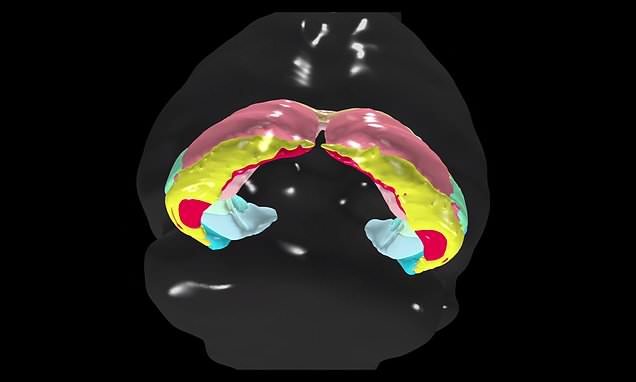 Scientists have created a new ‘atlas’ of the brain region impaired by Alzheimer’s disease.

Researchers at the University of Southern California in Los Angeles have illustrated the most detailed version to date of the structures, nerve connections and functions of the hippocampus.

Also known as the brain’s memory bank, the hippocampus is first part of the brain damaged by Alzheimer’s, but how this occurs is not understood.

The team hopes that the new map can be used by doctors to deliver genetically-targeted drugs to specific neurons to slow down the effects of the age-related brain disease. 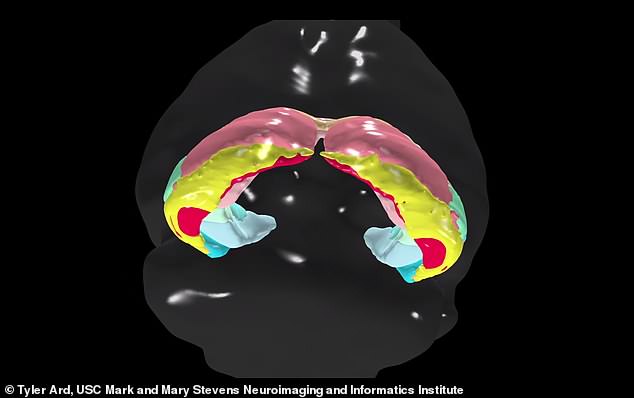 A team at the University of Southern California have illustrated the most detailed version to date of the sub-regions of the hippocampus, the first part of the brain damaged by Alzheimer’s

The hippocampus has a similar shape to a horseshoe and sits near the base of the brain.

It is responsible for processing memory – both long-term and the location of objects and people – and emotional responses.

In the early stages of Alzheimer’s, the hippocampus is especially vulnerable to damage.

This damage can, in turn, lead to other diseases and disorders such as epilepsy.

An estimated 5.7 million Americans of all ages are living with Alzheimer’s disease in 2018.

HOW TO DETECT ALZHEIMER’S

Alzheimer’s disease is a progressive brain disorder that slowly destroys memory, thinking skills and the ability to perform simple tasks.

It is the cause of 60 percent to 70 percent of cases of dementia.

The majority of people with Alzheimer’s are age 65 and older.

It is unknown what causes Alzheimer’s. Those who have the APOE gene are more likely to develop late-onset Alzheimer’s.

There is no known cure for Alzheimer’s, but experts suggest physical exercise, social interaction and adding brain boosting omega-3 fats to your diet to prevent or slowdown the onset of symptoms.

Sufferers experience a decline in cognitive, behavioral and physical abilities and there is currently no cure.

For this study, the team at USC used a mouse brain because it has a structure and connectivity that is similar to a human brain.

‘Like a new atlas, we’ve constructed the most detailed diagram of the hippocampus to date,’ said lead author Dr Michael Bienkowski, a researcher at the USC Institute for Neuroimaging and Informatics in the Keck School of Medicine.

‘With a better map, we can see each region and how it functions. A better map is a resource scientists can use to better understand the hippocampus and how its degeneration leads to diseases.’

Disconnections within the brain underlie several illnesses aside from Alzheimer’s including autism spectrum disorders, Huntington’s and Parkinson’s.

While scientists have understood the hippocampus’s basic construction, they haven’t been able to identify how nerve cells interact with the sub-regions.

By using fluorescent tracers and 3-D animation, the researchers were able to uncover cells and nerve connections to other brain regions.

‘We see it doing different things, and this gives us a new way to understand how the whole thing works together. This should have a very profound and broad impact,’ Dr Bienkowski said.

The Centers for Disease Control and Prevention says the disease is responsible for 93,500 deaths every year, and both the prevalence and death rate will increase as the US population ages.

The Mouse Connectome Project is part of a larger project funded by the National Institutes of Health to map all neural connections in the brain and to understand how they regulate behavior. 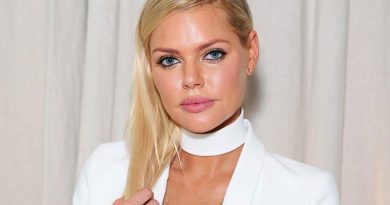 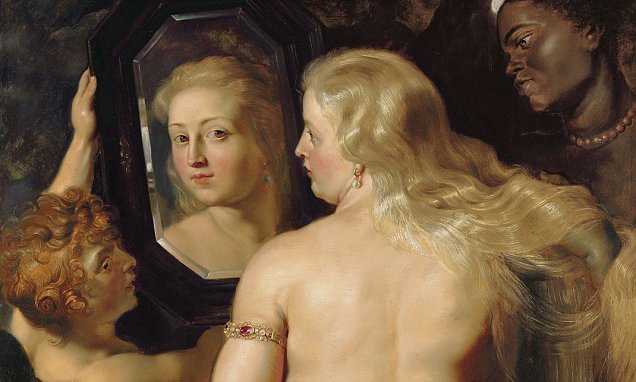 Beauty may NOT be in the eye of the beholder, psychologists find