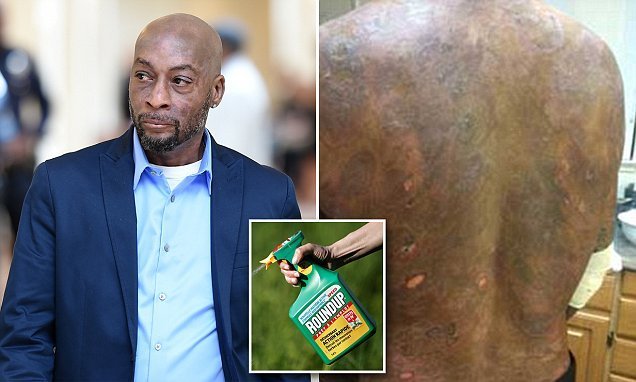 Groundsman, 46, is awarded $289M by jury in historic trial that ruled weedkiller Roundup DID cause his terminal lymphoma – and company ‘acted with fraud and malice’ by claiming it was harmless

Roundup does cause cancer, a jury has declared in an unprecedented trial into the health dangers of Monsanto’s weedkiller.

After three days of deliberations, jurors on Friday sided with terminally-ill groundsman Dewayne Johnson, 46, who has just weeks to live, awarding him $250 million in punitive damages, plus nearly $40 million in compensatory damages, bringing the total to $289 million.

They also found Monsanto ‘acted with malice, oppression or fraud and should be punished for its conduct,’ Judge Suzanne Ramos Bolanos announced in court in San Francisco.

Lawyers were demanding $412 million for the married father-of-two, who doctors say has just weeks left to live.

The groundskeeper, who worked for years in Benicia, California, was diagnosed with non-Hodgkin’s lymphoma – a cancer that starts in the white bloods cells – in August 2014. He mixed and sprayed hundreds of gallons of Roundup to keep grass and weeds under control.

The liable verdict means the case could open the door to hundreds of additional lawsuits against the company recently acquired by German-based pharmaceutical and chemical group Bayer. 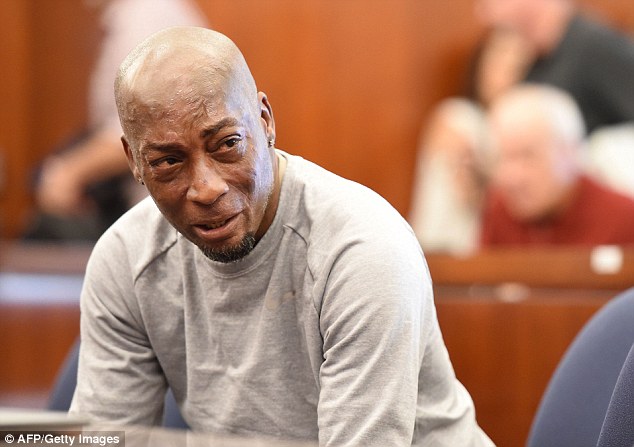 Victory: Dewayne ‘Lee’ Johnson hearing the verdict on Friday, when jurors awarded him $250 million in punitive damages, plus nearly $40 million in compensatory damages, bringing the total to $289 million 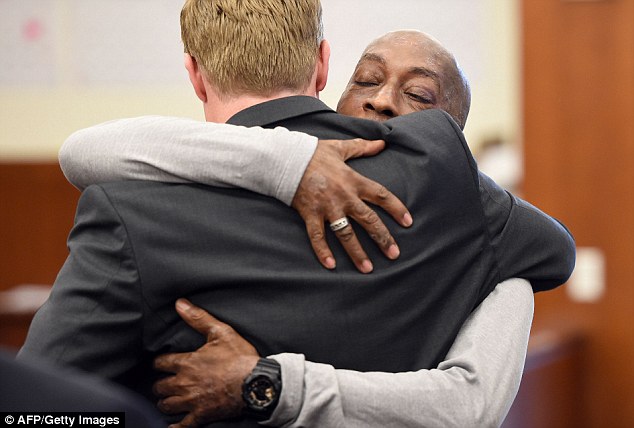 Johnson, 46, was diagnosed with non-Hodgkin’s lymphoma in 2014, and he believes it was caused by his repeated use of Roundup weedkiller as a school groundsman in California. He is seen here hugging one of the lawyers after the victory 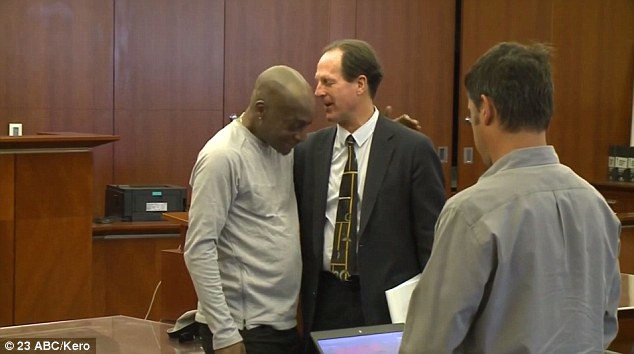 They also found Monsanto ‘acted with malice, oppression or fraud and should be punished for its conduct’ towards Johnson (pictured with one of his lawyers on Friday) 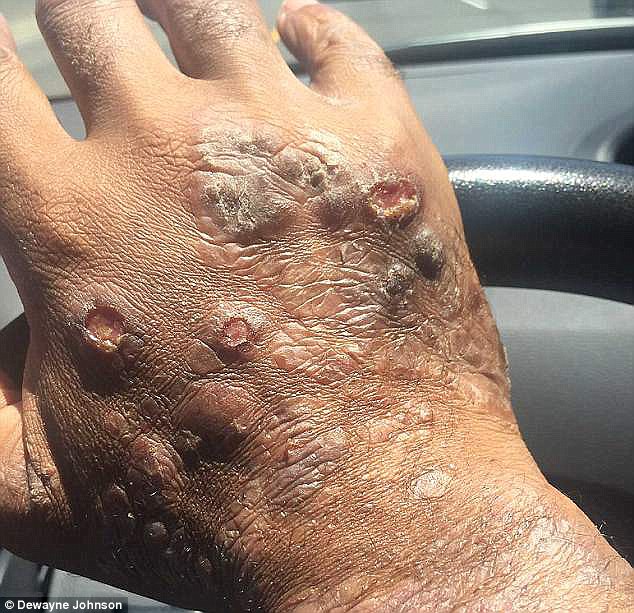 Johnson was diagnosed with non-Hodgkin’s lymphoma – a cancer that starts in the white bloods cells – in August 2014 and believes Roundup is responsible. Pictured: Johnson’s hand covered in lesions

The first-of-its-kind verdict was delayed as jurors spent hours analyzing the timeline of Johnson’s symptoms, the validity of his expert witness’s testimony, and the discrepancies between Monsanto’s medical findings and that of their critics.

Reacting to the verdict, co-lead trial counsel Brent Wisner said it was a result of newly-revealed, confidential company documents.

‘We were finally able to show the jury the secret, internal Monsanto documents proving that Monsanto has known for decades that glyphosate and specifically Roundup could cause cancer,’ Wisner said.

‘Despite the Environmental Protection Agency’s failure to require labeling, we are proud that an independent jury followed the evidence and used its voice to send a message to Monsanto that its years of deception regarding Roundup is over and that they should put consumer safety first over profits.’

Ken Cook, president of the Environmental Working Group, said it was a victory for all workers.

‘Monsanto made Roundup the oxycontin of pesticides and now the addiction and damage they caused have come home to roost,’ he said. ‘This won’t cure DeWayne Lee Johnson’s cancer, but it will send a strong message to a renegade company.’

Monsanto vice president Scott Partridge said in a statement that the company is already poised to appeal the decision.

‘We are sympathetic to Mr. Johnson and his family,’ he said, but insisted that ‘[t]oday’s decision does not change the fact that more than 800 scientific studies and reviews…support the fact that glyphosate does not cause cancer, and did not cause Mr Johnson’s cancer’.

He added: ‘We will appeal this decision and continue to vigorously defend this product, which has a 40-year history of safe use and continues to be a vital, effective, and safe tool for farmers and others.’

The case is the first to reach trial alleging a cancer link from Roundup, one of the world’s most widely used herbicides.

Johnson used a generic version of Roundup called Ranger Pro repeatedly in his job after being promoted to groundskeeper in 2012 through mid-2015.

One of Johnson’s attorneys, Timothy Litzenburg, told DailyMail.com that Johnson called the Monsanto hotline in November 2014 about his diagnosis.

‘He said: ‘Hey I just want to let you know I have this and I want to ask could it be contributing to my cancer?” Litzenburg said.

Johnson’s concerns landed on the desk of Dr Daniel Goldstein, the lead of medical sciences at Monsanto, who told colleagues he would call Johnson back but never did, according to an internal company email.

Litzenburg told DailyMail.com that Johnson used hundreds of gallons of the products between 30 and 40 times per year.

Testimony was heard that twice Johnson became drenched in the Ranger Pro.

Before reaching their verdict, the jury asked for the testimony of Johnson’s expert witness oncologist Dr Chadi Nabhan, the timeline of Johnson’s first instance where he was sprayed with Roundup and all of his medical records, according to Courthouse News reporter Helen Christophi.

All was given but the medical records because they hadn’t been entered as evidence.

In closing arguments, the attorney for Monsanto, George Lombardi, had railed against Dr Nabhan for claiming that glyphosate – the active ingredient in Roundup – causes mycosis fungoides, a type of non-Hodgkin’s lymphoma.

Lombardi said Nabhan was the only doctor to have found such a link and, if it was true, why he hasn’t received awards for the discovery.

The jury also wanted a timeline of the first time Johnson was accidentally drenched in the pesticide.

While Johnson’s attorney said the accident it occurred in 2014, Monsanto’s attorney argued that it was in September 2013 and implied that Johnson’s team lied about the dates to make it appear like it was closer to his diagnosis. 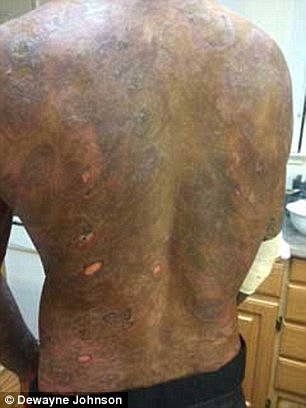 Johnson said he contacted the company in 2014 after he received his diagnosis to ask about a potential cancer link but never heard back. Pictured: Johnson’s back covered in lesions

Litzenburg said Johnson, who is between rounds of chemotherapy, ‘is actually on borrowed time, he is not supposed to be alive today.’

This is because in September 2015, doctors told Johnson that he was likely to die in less than a couple of years, Litzenburg said.

The case, filed against Monsanto in 2016, was fast-tracked for trial due to the severe state of Johnson’s non-Hodgkin’s lymphoma.

The father-of-two testified on the stand that he would have ‘never’ sprayed Ranger-Pro if he knew it would cause harm.

‘I would’ve never sprayed that product on school grounds or around people if I knew it would cause them harm,’ he said on the stand, according to Courthouse News reporter Helen Christophi.

‘It’s unethical, it’s wrong. I have children who go to school. People I don’t deserve that. They deserve better.’

Another of Johnson’s attorney’s, Brent Wisner, told the court that he is seeking more than $39 million in compensatory damages and $373 million in punitive damages. 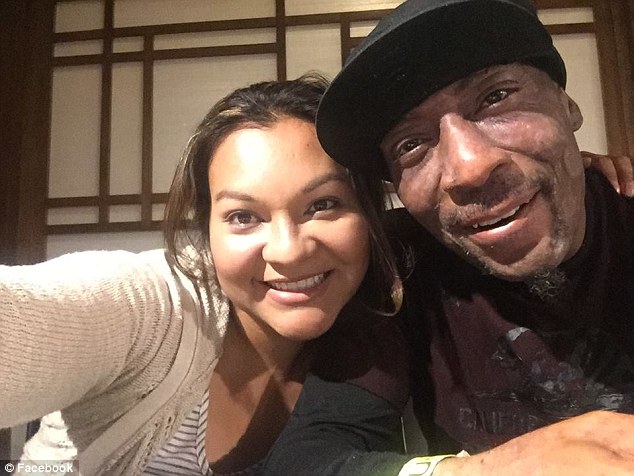 The father-of-two testified on the stand that he would have ‘never’ sprayed Ranger-Pro if he knew it would cause harm. Pictured: Johnson, right, with his wife Araceli Johnson 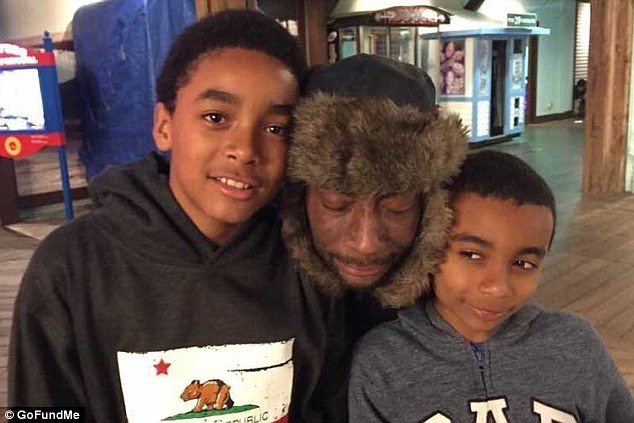 Johnson (pictured, with his sons) said he sprayed hundreds of gallons of the product between 30 and 40 times per year and was allegedly drenched in it repeatedly

Wisner said Monsanto opted against warning consumers of the risks and that instead ‘they have fought science’ by playing down the suspected link between the chemical herbicide and cancer.

‘Monsanto made a choice to not put a cancer warning on the label, that is a choice that reflects reckless disregard for human health,’ Wisner told jurors on Tuesday in closing arguments.

‘Today is [Monsanto’s] day of reckoning,’ Wisner told jurors on Tuesday in his closing arguments.

THE SAGA SURROUNDING THE SAFETY OF GLYPHOSATE

Glyphosate is an herbicide first registered for use in the US in 1974.

It is marketed either as a salt or an amber-colored liquid with no smell.

Monsanto markets glyphosate as part of the pesticide Roundup.

Several studies found that high doses administered to laboratory animals  caused cancer, although the evidence is ‘limited’ when it comes to humans.

In March 2015, the World Health Organizatrion ranked glyphosate a Group 2a carcinogen, a substance that probably causes cancer in people.

In 2017, California added glyphosate to its proposition 65 list, which requires Roundup to carry a warning label if sold in California.

Monsanto has vehemently denied that its product causes cancer and says and more than 800 studies that have established its safety.

Yet more than 4,000 plaintiffs have filed lawsuits –  800 over the past year – claiming Monsanto made them or members of their family sick.

‘Every single cancer risk found had this moment, where the science finally caught up, where they couldn’t bury it anymore.’

Monsanto has denied any link with the disease, saying the product has undergone stringent testing and more than 800 studies have established its safety.

‘The message from the evidence is clear, and that is this cancer was not caused by Ranger Pro,’ said George Lombardi during closing arguments.

‘The facts are what should lead you in this case.’

Attorneys for the company also said that non-Hodgkin’s lymphoma takes two-and-a-half years to develop and that Johnson developed symptoms of his cancer about one-and-a-half years after he began using the product.

They therefore argued that his cancer had already likely taken hold.

But Wisner argued that Monsanto ghost-wrote research citing the weed killer’s safety and then cited it.

Wisner contended that the main ingredient glyphosate – a chemical compound declared carcinogenic by the World Health Organization – combined with other chemicals in the Roundup, resulted in a cancer-causing ‘synergy.’

A key to Johnson’s case will be whether jurors are convinced that Monsanto’s pesticide caused or exacerbated his illness. 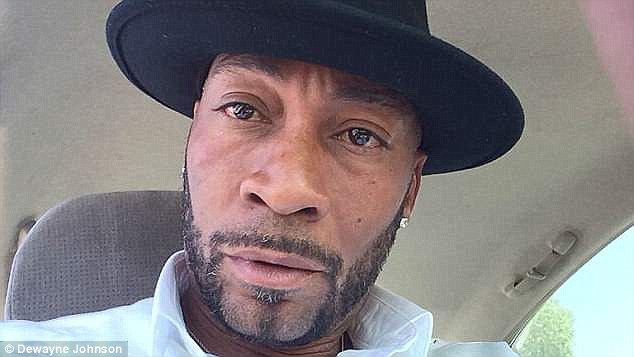 Johnson’s attorney say they are seeking $39 million in compensatory damages and $373 million in punitive damages. 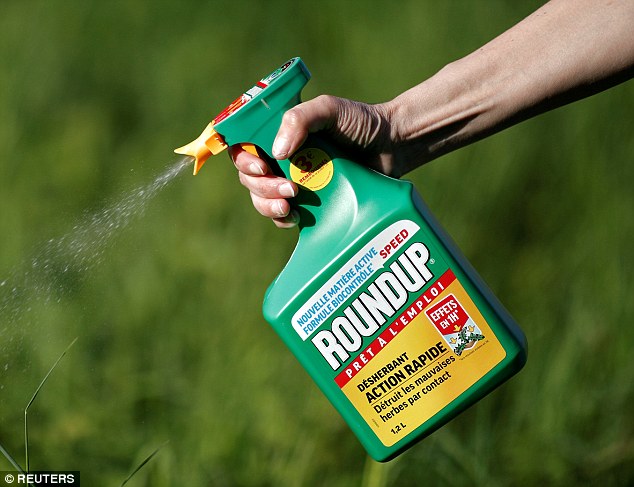 Monsanto has denied any link with the disease, saying the product has undergone stringent testing and more than 800 studies have established its safety

‘Your verdict will be heard around the world,’ Wisner told jurors.

‘Monsanto will have to finally do something – conduct those studies they never conducted and warn those people they never warned.’

Roundup has been approved the US Environmental Protection Agency, according to Lombardi.

Two years after the WHO labeled it ‘probably carcinogenic’, the state of California named glyphosate an ingredient that causes cancer under the state’s Proposition 65, which requires Roundup to carry a warning label if sold in California.

Additionally, earlier this year, a peer-reviewed study found that women in agriculture-intensive areas of Indiana tended to have shorter pregnancies if they had been regularly exposed to glyphosate.

Founded in 1901 in St Louis, Missouri, Monsanto began producing agrochemicals in the 1940s. It was acquired by Bayer for more than $62 billion in June.

Bayer announced at the time that it would be dropping Monsanto’s name and replacing it with Bayer as the company name.

‘Bayer will remain the company name. Monsanto will no longer be a company name. The acquired products will retain their brand names and become part of the Bayer portfolio,’ Bayer said in a statement to Reuters.

‘Bayer will remain the company name. Monsanto will no longer be a company name. The acquired products will retain their brand names and become part of the Bayer portfolio,’ Bayer told Reuters in a statement

In other words, products like Roundup would retain their name, but be advertised as Bayer’s Roundup, not Monsanto. 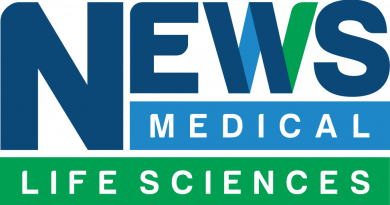 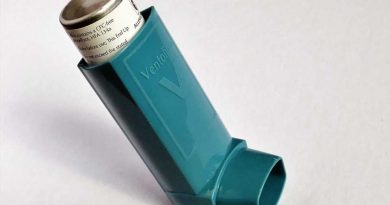 There is no ‘one size fits all’ approach to treat severe asthma, study shows