Before there was John Legend, there was Daniel. He stole Chrissy Teigen's heart in fourth grade with a glittery gesture that may or may not have inspired her new collection with Becca. Let me explain.

While interviewing her over the phone yesterday, Teigen told me a story about her first boyfriend. They'd go to the local roller rink with their classmates, and the boys would buy gifts for their dates from the DJ. They could choose from either a light-up neon rose or roll-on body glitter. After they did so, the DJ would make an announcement.

"Everybody had been going up and getting a rose, and finally my name was called," Teigen recounts. "Daniel had chosen the roll-on body glitter for me. Still to this day, I am not a rose girl. Maybe it comes from Daniel."

Wherever Daniel is now, he'd be glad to know that Teigen launched her very own shimmery body oil today with Becca. The multi-hyphenate teamed up with the cosmetics company once again, this time on a three-piece summer makeup collection all about getting your glow on. Her favorite product of the trio is obviously the Glow Body Oil, but her reasoning doesn't just stem from Daniel.

When she was deciding what to create for the new line, Teigen tried to zero in on what she's known for. She noticed she's not the queen of smoky eyes or anything else makeup related. Instead, she has her signature glow. "I do really love taking good care of my skin," she says. "When I work on a red-carpet look with my makeup artist Mary Phillips, we get really focused on skin. We want it to look really flawless, whether its legs, arms, collarbones. We kind of take pride in how good it looks in photos, so I was like, 'oh, let’s do something for body that everyone can use.'"

Unsurprisingly, Teigen's favorite place to slather on the shimmery stuff has everything to do with Instagram. She quickly tells me it's her collarbones. Reason being? "I don’t do a ton of selfies, but when I am Instagram Storying, I kind of stick to the face," she explains. The body oil helps give her clavicle area a golden sheen that glows beautifully in photos when the light hits it, she adds. You won't catch her rubbing it all over her butt, though, because she's convinced she doesn't have one. "I’m not the kind of person that’s going to pop my butt out," she says. "Maybe if I had a butt, I would be greasing those cheeks up, but I stick to collarbone and up."

One of my biggest body-oil concerns is the texture and stickiness, but Teigen quickly dispels my fears. According to her, the best part of the Glow Body Oil is it veers on the drier side and doesn't have a thick, goopy texture, so you can smooth it on wherever you want, no matter where you are. You don't have to worry about sand or hair clinging to you. Bringing up that last part makes Teigen recall her past Sports Illustrated shoots. "We used baby oil gel and that was a hair nightmare," she says. "This one you can get in your hair, and it’s not going to look like you haven’t showered in 10 years." She even suggests raking some through your hair to help refresh it since it has a fresh floral scent.

Teigen's glad sand doesn't stick to her skin with this oil, too, because it's one of her biggest pet peeves. "Sand ruins my day," she adds. To prove it, Teigen tells me that on one of her first dates with Legend, she laid down about 10 towels that led to the water so she didn't have to touch the sand. As a fellow sand hater, I thoroughly respect that.

Having a lip product included in the collection was key because Teigen says she's been putting a lot of focus on her lips lately. Between caring for her newborn Miles and hanging out at the beach often with her family, she hasn't been wearing a ton of makeup. "Style-game wise, I love a hat and a huge pair of sunglasses," she adds, "so the only thing you’re really seeing is my lips."

Teigen isn't a fan of lip stains, though. She prefers a gloss because it's foolproof. "I’ve always wanted something easy that I could apply myself without a mirror and know that it’s going to look flawless," Teigen explains. You can count out a lipstick, too. Not only does it have a tendency to leave a ring around the lips if you don't touch it up, Teigen also has some personal problems with it. "I think bold lips are great for people who are able to just do sexy, coy smiles but I’m completely incapable of that, so I end up looking like a killer clown or something," she says. With this in mind, Teigen picked three neutral shades of gloss, and her everyday go-to is Beach Nectar, a soft berry shade.

You can shop the new lip glosses and body oil from Chrissy Teigen's new Becca collection now on beccacosmetics.com and sephora.com. Throw them in your beach bag like Teigen or let the body oil help you re-live your '90s body glitter days. 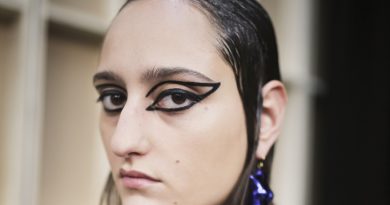 "Can Sex Really Stretch Out My Vagina?"