De Blasio declared a state of emergency on Tuesday, giving him the power to order vaccinations in four Brooklyn ZIP codes where 285 measles cases have been reported since October, particularly in the Orthodox Jewish community.

Today, five mothers, with the support of five doctors and patient advocates, filed a lawsuit demanding the order be suspended.

They say vaccines go against their religious belief that they should not put a foreign body in their or their child’s body, and they believe de Blasio’s order unfairly targeted Jews.

But the most fiery testimonies came from the patient advocates, including one from Vera Sharav, a child survivor of the Holocaust and former librarian who has become a notorious vocal critic of the medical establishment and vaccines.

In a strongly-worded affidavit, Sharav draws on her personal experience with anti-Semitism to accuse New York City of ‘totalitarianism’.

‘As a survivor of the Holocaust, I am especially attuned toward recognizing the signs of government overreach,’ Sharav writes in her affidavit filed to a Brooklyn court on Monday morning. She adds: ‘Dictatorships always invoke “the greater good of society” when they trample individual human rights.’ 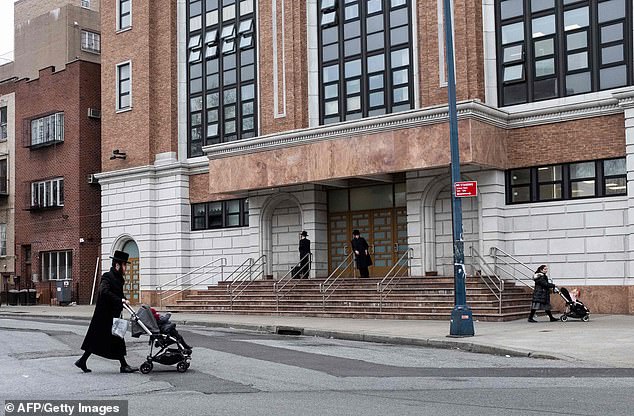 Normally, New York City allows for people to skip vaccinations if they have a medical reason or a religious reason. But Mayor Bill de Blasio has rescinded religious exemptions for the select area in Brooklyn where measles is spreading among Orthodox Jews

Last week, city officials said those who refuse could face fines of up to $1,000 or six months in jail, according to New York Senate emergency laws.

New York City is one of the states that allows for people to skip vaccinations if they have a medical reason or a religious reason.

But Mayor Bill de Blasio has rescinded religious exemptions for the select area in Brooklyn where measles is spreading among Orthodox Jews. 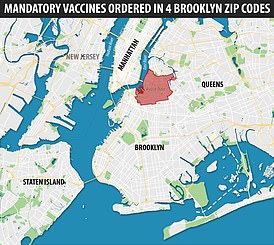 (While the measles vaccine can be given separately in other countries, it is only offered as part of the MMR in the United States.)

Flouting that rule could incur a $1,000 fine or a six-month jail sentence, officials said.

They plan to track unvaccinated people by tracing anyone who may have come into contact with people who have measles.

New York City health commissioner Dr Oxiris Barbot neglected to elaborate on whether they would fine people twice if they continued to refuse vaccination.

How is this possible? The legality of NYC’s vaccine order

When it comes to what constitutes an emergency, and how to handle it, New York state laws are broad.

The point of a state of emergency is to ‘protect life and property or to bring the emergency situation under control.’

The mayor has the power to declare a state of emergency ‘in the event of reasonable apprehension of immediate danger’ or ‘that the public safety is imperiled.’ It can be declared for the entire city, or just certain ZIP codes.

It can last for up to 30 days, or until the chief executive (the mayor) rescinds it. In this case, de Blasio says, it will last until April 17, though he does have the power to end it early or extend it.

The law is broad about what measures the mayor can employ to bring an emergency situation under control.

Whatever measures the city decides on, they become (temporarily) law. During the emergency period, anyone who violates the new rules is guilty of a class B misdemeanor, which carries a fine of up to $1,000 or a six-month jail term.

Other cities have levied the same threats on citizens. For example, New Jersey has issued a state of emergency during snowstorms, warning anyone who drove during the curfew period would be slapped with a $1,000 fine.

2. A 100-year-old precedent for forced vaccines in Massachusetts

In 1905, the Supreme Court sided with Massachusetts after the state introduced mandatory smallpox vaccines, with a $5 fine for refusal.

It had been challenged by Rev Henning Jacobson, who said he and his son had developed allergic reactions to the first vaccine and didn’t want to do it again.

The judge ruled that their concerns were not enough to override the public health risk.

The five mothers, who were identified only using their initials in the lawsuit, live in Williamsburg and Clinton Hill, two neighborhoods with Orthodox Jewish hubs that are included in the mandatory vaccines order.

All of the mothers cite scripture to defend their beliefs that they should not put foreign bodies in their child’s bodies.

One, whose child is pre-school age, adds that the order has triggered a strong sense of antisemitism in their neighborhood and online.

‘What is happening right now in Brooklyn neighbor hoods is an absolute witch hunt. Members of the Jewish community are being publicly castigated and talked about in the most anti-semitic ways I could possibly imagine,’ the mother, identified only as A.L., writes.

She continues: ‘We are a city of almost 9 million people. There is no possible way that a certain group or zip code could encompass all of the germs and exposure in this great city of constantly moving people.’

Each of the mothers pointed to the fact that immunity from the MMR shot wanes over time, many adults are behind on their top-ups, and that de Blasio appeared to admit that he is due a booster shot. (When asked if he’d had the MMR at last week’s press conference, de Blasio said, ‘long ago…’).

A.L. writes: ‘So why is it that my child is considered such a threat, when it is likely that a little less than half of the adults in this city – regardless of where they live – have equal chance of contracting and passing on this or any other vaccine-preventable illness?’

Who will win? It could go either way, public health experts say

1. Is it an emergency? It depends on how deadly measles is

As for whether this constitutes a state of emergency, that could be something of a coin toss for the judge whose desk this lands on, according to Tina Batra Hershey, JD, MPH, assistant director for law and policy at the University of Pittsburgh Center for Public Health Practice.

While 285 cases is a small case-load in a city of nine million people, it is a lot for just four ZIP codes.

But it depends how deadly the judge deems measles to be.

‘We have a disease that’s spreading rapidly, it’s a highly contagious disease, it’s hitting all those thresholds.

‘But there need to be scientific principles applied.

‘The judge will have to look at how the disease is transmitted and how deadly the morbidity of measles will be.’

Those pushing for the judiciary to side with New York City include Peter Pitts, FDA Associate Commissioner from 2002 to 2004, who believes there is no question on how dangerous measles could be.

He is furious about the outbreak.

‘Measles is an extremely serious disease and it shouldn’t sound trite when people call it a “childhood disease”. It’s a killer and its eradication was a major public health victory.’

Measles can develop into pneumonia, or encephalitis (inflammation of the brain), which Pitts warns could have a years-long impact on the respiratory system.

‘You may never be able to do athletics or walk properly or be able to maintain the average vim and vigor of an adult,’ Pitts said.

‘This is not a disease that, as it progresses seriously, you can deal with at home with tender love and care. It causes serious, life-long complications.’

Spluttering at the idea of ‘measles parties’ (where families deliberately infect their children with measles instead of vaccinating them), Pitts said he believes anti-vaxxer parents should be jailed.

‘I think the mayor’s order to have mandatory vaccinations was absolutely the appropriate thing to do and I wish the penalty was more robust. People should be put in prison and their children in foster care. This is child abuse at the molecular level.’

Batra Hershey says the religious component may be a weak challenge.

Although the 1905 Massachusetts precedent that allowed forced vaccines did not take religion into account, there are other rules that give New York City the edge.

There is a dictum in the 2nd Circuit (in which New York falls) that allows judges to disregard religion in certain circumstances – and it has been upheld in New York before.

In the case, Prince vs Massachusetts, the judge concluded: ‘A law that is neutral and of general applicability need not be justified by a compelling governmental interest even if the law has the incidental effect of burdening a particular religious practice.’

And: ‘The right to practice religion freely does not include liberty to expose the community or the child to communicable disease or the latter to ill health or death.’

In January 2015, the United States Court of Appeals used this dictum to side with New York City against Catholic parents Nicole Phillips and Fabian Mendoza–Vaca, whose kids had been excluded from school.

Their children, who were not vaccinated on religious grounds, were excluded in December 2011 and January 2012 after a classmate was diagnosed with chickenpox.

The judge ruled their exclusion was justified, relying heavily on Prince v Massachusetts.

3. Is the order counter-productive?

Many public health experts say that, while the order is a valid move to contain the outbreak, it may have the side effect of driving anti-vaxxers further away from mainstream medicine and health authorities.

‘I do think this might be going a little too far,’ Batra Hershey said.

‘They [the city] haven’t done the quarantines or limiting movements that other places have. They went straight down this path that no other city has really done in a very, very long time.

‘You’re talking about making someone put something into their body. It’s not mandatory treatment, it’s mandatory vaccination.

‘I think it may have been better for the authorities in New York to think about how the anti-vaccination community would react to this.’

Indeed, driving factor behind Brooklyn’s measles outbreak is the circulation of a magazine called PEACH (Parents Educating and Advocating for Children’s Health), a religious illustrated handbook that demonizes vaccines with alarming drawings and storylines.

Blima Marcus, an Orthodox Jewish nurse in Williamsburg trying to counteract PEACH with her own magazine (PIE, Parents Informed and Educated), warns the situation is incredibly complex, with layers of cultural beliefs and deep-rooted concerns that could be intensified with a hard-line approach.

‘It’s not getting to the root of the problem,’ Marcus told Gothamist.

‘The government needs to put their efforts into understanding the root cause of the hesitancy and fears of vaccinating and addressing that…What you really need to gain from the community is trust with slow, long-term education. You’ll really get people to listen and reverse the damage that’s been done by the anti-vaccine movement that’s so vocal here.’ 9 Healthy Habits You Should Establish If You're Trying to Conceive How not to be a Christmas pudding